Another wedding related post and then 2 more photos and then I am probably done for a little bit. Perhaps.

While I went back to work on Tuesday,  I really didn’t feel like a human again until Thursday. I really thought I was coming down with a cold or something. I was sleeping quite a lot extra and feeling so brain foggy. But, it turns out it really was just leftover exhaustion.

Anyhow, both groomsmen and Marja gave toasts at the wedding. Since it was such a small venue and no waitstaff, one of the nicest things to see was the bridal party serving the champagne right before toasts. I loved that, it felt very personal.

I truly wish someone had recorded the toasts. They were beautiful. The best man had clearly worked so hard on his. It was funny, it was touching, it made me tear up, it made me laugh really hard, and most of all, it was true. I loved that all three of them touched on these long term friendships and how it almost seems appropriate that no one can even really remember when we all walked into each other’s lives. And once those three toasts were over, Mr. Ink said “Ok that’s enough speaking now” which was ridiculously on brand for him.

After a while though, much to my surprise, Mr. Ink decided that he wanted to speak! You could have knocked me over with a feather. And so he did. He thanked people for coming. He then thanked me and let everyone know that all these details were entirely my vision. Then he thanked his sister in law, stating that she is like my general, making my vision happen. This is basically the most accurate way to have put it, as she truly went above and beyond in every way to make sure I had my wedding just as I had imagined it. 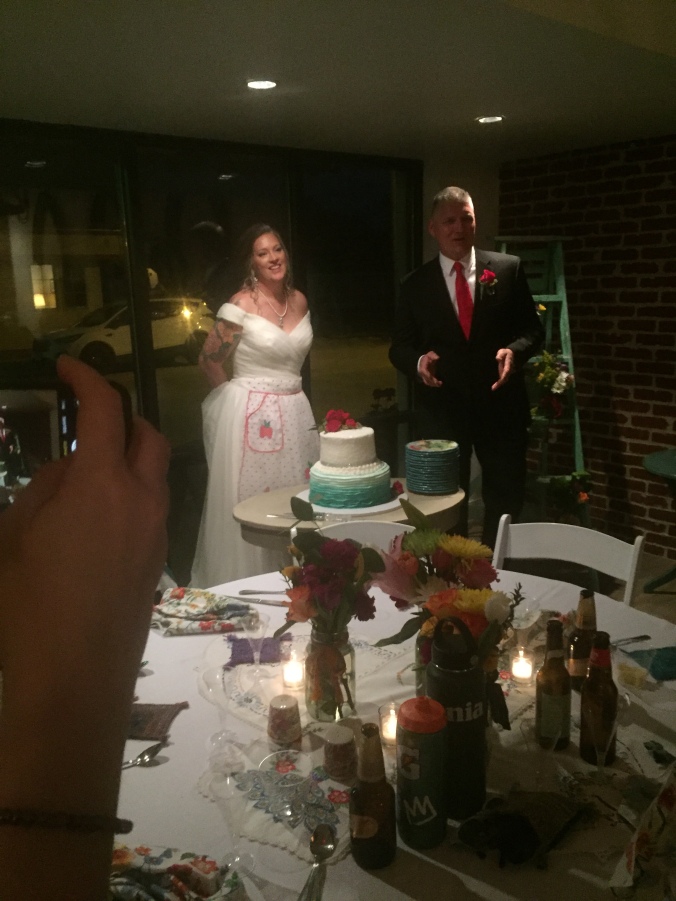 And then we got to the cake cutting. You may notice my apron, Marja and I had gone on the hunt for vintage aprons since so much work would be done by guests. I chose one for the cake cutting.

The cake was TRULY delicious.

And I absolutely thought we’d be eating cake forever. But, after brunch on Sunday there wasn’t much left. I guess that’s what happens when the cake is GOOD.

There’s so much happiness in these photos and I am so glad to be able to post them. I am looking forward to seeing the professional photos but there’s something special about these little moments captured as well.