I will just warn ahead of time that this isn’t going to be some fantastic progress month. I did a lot of testing of makeup this month while getting ready for the wedding. The week leading up to the wedding I barely wore makeup. During the days I was wearing makeup, it wasn’t the project pan items. I was also attempting to finish up some sample size items for the beauty balance, leaving me using project pan items even less than usual. I am sure next month will be more effective.

It was, however, lovely and refreshing to have gotten an opportunity to refresh and change out some items at the end of last month. That is really a fantastic way to renew interest in the project.

Let’s start with all the little sample size fragrances. I did use a fragrance this month but then added two more in, so that’s not exactly progress. I currently have 10 little bottles of fragrance.

I’ve been concentrating on the Omnia and it’s pretty close to being done. It is a nice fragrane that does not last through the day for me. If I thought to put it in my handbag and reapply at lunchtime, it would already be gone. But I don’t do that, I use what I keep at work instead.

Last month’s photos above. I’ve used both palettes a bit, the finishing powder in the cover FX palette in particular is developing quite a dip. I bet we see pan on that before the end of this quarter. The highlighters are a little on the dark side for me, I should try them as eyeshadow. The contour is fine, and I have been using the brightener as both an inner corner eye color as well as a regular highlighter. I’ve continued to expand the pan on the sleek palette but slowly. I have used this less because I’ve been using more powder foundation.

I had both my bare minerals powder foundations in this project. I finished the original formula and am now left with just the matte formula. I have decided I rather enjoy having the matte formula in my collection so I don’t think I am going to be worrying too hard about getting that one used up this quarter. I’ll just rotate it in when I can.

No dip is seen in the charlotte tilbury powder sample yet, I used the olive oil face mask only once, and the peach colored eyeshadow two or three times only. There’s a tiny bit of progress on the cover fx powder, but I have decided I’ll concentrate on the charlotte tilbury one now. I am still working away on the mac paint pot, no pan yet but I’ve been trying to wear it down pretty evenly. The little clinique eyeshadow I am using to set my base has just the tiniest bit left, I think it’ll be gone next month.

When it comes to lip products I have realized it’s a bit unwise to have chosen two bright coral colors to try to work on this quarter. I have used them both, and I am getting into a bit of a routine now with them. Apply the liquid lipstick in the morning and then when touch-ups are needed, the cream lipstick is great for that. This eliminates the problem of the cream lipstick being a bit sheer as well, with the punch of liquid lipstick under it, sheerness isn’t noticeable. I’ve used the gloss a bunch but I don’t like it. And, the bite lipstick I love, I bet it is gone next month. I am proud of the little progress I made on the flower beauty coral lipstick. (I did not include photos of the liquid lipstick and the gloss, progress cannot be seen.)

Last month I forgot to include a photo of where I am on the it cosmetics eye pencil. No matter, it doesn’t look like I made progress on it this month despite feeling like I used it regularly. So, this month’s update is the same as last month.

Steady progress was made on both the deva curl cream and the cover FX primer. I like both products fine so it isn’t much trouble to use them. I am eager to work on some other hair product at some point though! I feel a bit in a rut right now. It is rather hard to figure out where I am at with the blurring primer. I do think that I used less of it this month because I was using a bare minerals primer with my bare minerals powder foundations.

You’ll notice that I’ve added in my It cosmetics illuminating cc cream. It doesn’t stick to my face very nicely so I am going to work on using it up. Currently, I am mixing it with other foundations and that seems to be working nicely. I am sure it’ll take me ages to finish that one. 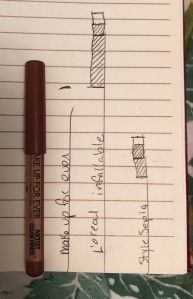 Last month I removed the L’oreal eyeliner from my collection. That was a declutter. I started out using the artist color pencil but then quit because I wanted to use it on wedding day. From here on out progress should be faster. That being said, this is a REALLY nice product. The style sepia eyeliner continues on, but I do think I’ll be done with that next month. Here’s the photo update:

So, overall, progress was made. Nothing particularly notable, except for the bare minerals original foundation. But I do feel rather good about the progress overall. Especially since I know I had to allow for various testing situations and special make up use as well as days of no makeup use.