When we last left off, I was 9 products leaving over what was entering.

And in that post, I made some big claims about how I was not going to purchase from the VIB sale.

Except, that’s not actually what happened. The first thing that happened was that I watched a review about the ordinary moisturizer that I wanted to pick up and try as a daytime moisturizer. It sounded like it was going to be much to heavy for my skin for daytime use. I am quickly running out of my current daytime moisturizer and I didn’t want to be without, nor did I want to go out hunting and purchasing a bunch of things that didn’t work for my purpose. So, instead, I purchased a moisturizer I know I like and then I also picked up the one from the ordinary to test out.

Another thing happened. The Game of Thrones collection from urban decay launched. I knew right from the start that I wanted two of the eyeliners. And eyeliners are on the list of things I have allowed myself to purchase. Really, the sale is a great time to get those two eyeliners. Except when I went to purchase, they were already out of stock. So, feeling like it was unlikely that those eyeliners would get back in stock in time for me to get them on sale, I just moved forward with the moisturizer purchase. I chose my free samples and called it good.

The very next morning, one of the eyeliners was back in stock. So I purchased it, chose my free samples, and it shipped as well. They arrived at the same time.

That’s 7 products leaving me only 2 out of my collection over those that entered. (And those of you following along in my project pan will also notice I’ve now allowed myself another three fragrances in my collection, complicating my project pan as well. But I LOVE trying fragrances, so that’s ok.)

So, naturally, I went into my empties tub and took a look around. 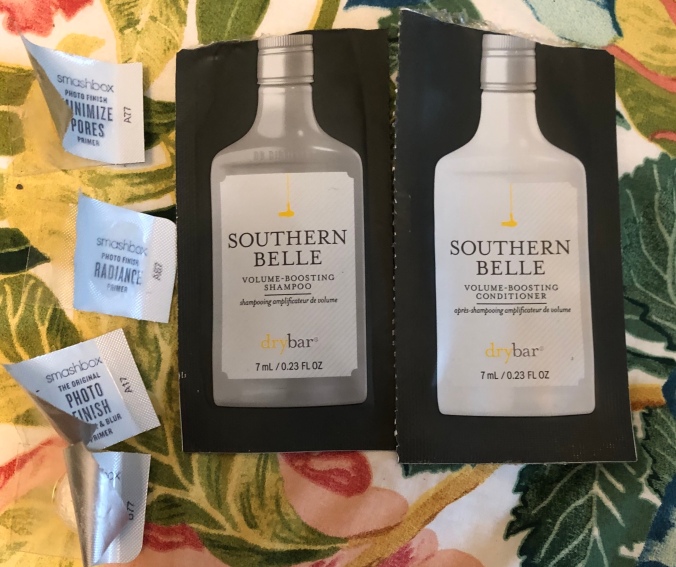 The result wasn’t very encouraging. I finished the samples of smashbox primer, for the record I only liked the radiance primer, and I finished a sample size of shampoo/conditioner. For those, I really liked the scent of them. It was rather a masculine scent that lingered on the hair for days, and I found it rather pleasant. But I am unlikely to purchase anyhow. I tend to enjoy heavy conditioning products rather than anything that claims to be volume boosting.  So, I’ve got 4 products leaving the collection over what has entered.

And one final note, I did try that the ordinary moisturizer. It is too think for daytime use for me. However, I think it’ll work just fine for nighttime use. I don’t regret having it, but am also very happy I picked up a different choice for the day.