I love my Alamar palette, I really do. I don’t use it that often. I should though! Each and every time I pull it out to use I get so excited about how well the mattes blend and how well the shimmers pop. I really do need to pick up the second palette because it truly is that good, and I imagine the second one is as well.

The palette in question: 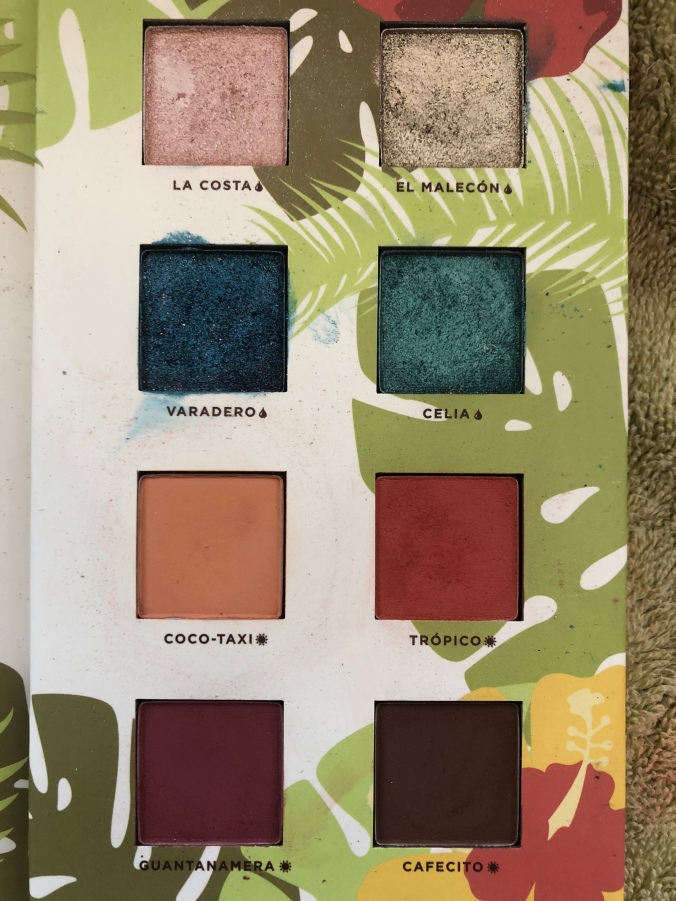 Even when just using the mattes I get the most incredible well-blended looks. Using the metallics just adds to the drama. It’s all so ridiculously easy to use as well. I do love this palette. It was the best boxy charm ever gave me. Nothing else has ever quite lived up to this one.

Anyhow, the look in question, let’s get to it. I used coco-taxi as a transition shade, used Tropico in my crease, and Guantanamera in my outer corner. This is pretty typical for me when I use this palette. I then added El Malecon all over my lid. I decided it didn’t have enough depth for me, so I then added celia over el malecon toward the outer corner. I did so lightly as I didn’t want this to become a teal look, I wanted to keep it toward the lighter color. But it did help add a little dimension. Then, I used coco-taxi on my under eye with tropico concentrated toward the outer corner of my under eye. I lined with style sepia liner (oh the joy I will feel the day I get to never use that liner again!) and used my urban decay gold shimmer on the inner corner. 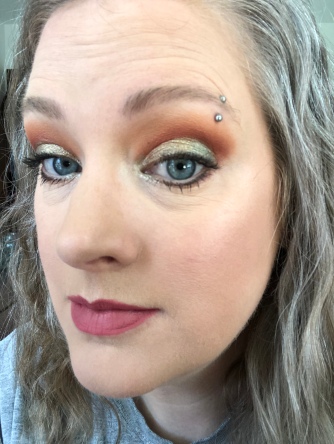 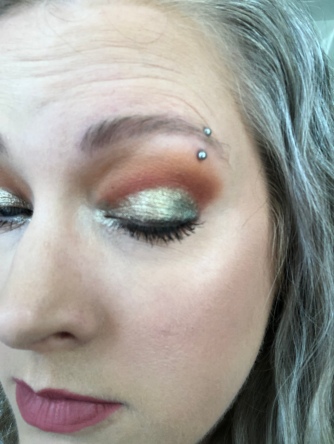 This truly is one of my favorite looks with this palette. It stands out and yet it is still a bit of a neutral look. In fact, I love it so much I want to recreate it again tomorrow.

Next up, using the Ace Beaute grandiose palette: 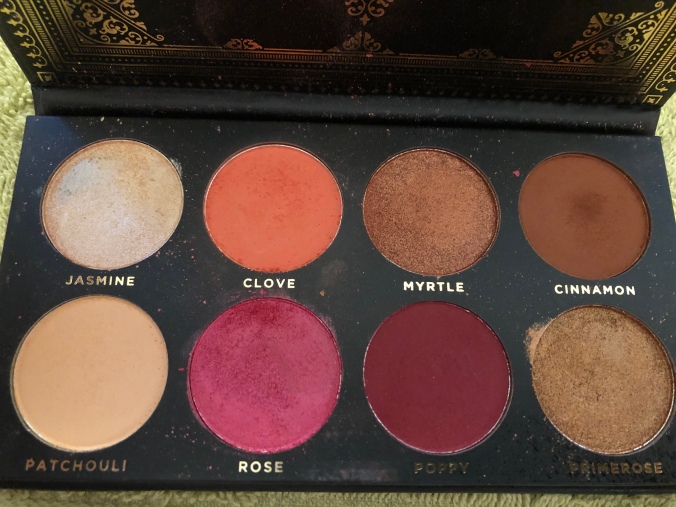 We received this palette in one of our subscription boxes. I haven’t played with it all that often, but I have very much enjoyed the looks I’ve created with it. Most of what I’ve created has clove in my transition and poppy or rose in my crease, giving me quite a colorful look. I often get compliments on these looks when I wear them at work even though I think they are a little overly dramatic. Now, rose is actually a shimmer, or maybe a satin? You might not think it works in the crease, but I have found that it does.

Today I wanted to avoid clove as a transition, so I started with cinnamon instead. I ended up using clove in the crease. Cinnamon was pretty dark as a transition so I used patchouli to blend it out and lighten it up toward the browbone. I used poppy in the outer corner and rose on the lid. That turned out pretty dark, and I wanted to lighten it up. So, I used jasmine popped on the center of the lid as a spotlight. Over the darker rose, it looked pretty nice but it took a bit of blending on the edges to look like it belonged there.

For the undereye I used cinnamon blended out and then rose toward the outer corner. If I had a do over, I wouldn’t have done the rose. I know full well that rose or pink on the lower lashline makes me look tired and/or sick. I tried to mitigate that a bit with using a nude liner on my waterline. But, it was probably too late. In any case, I lined with my style sepia brown liner of course. And for the record, I am NOT panning an eyeliner after I am done with the style sepia one! I used my gold urban decay liner on the inner corner. And that was that. 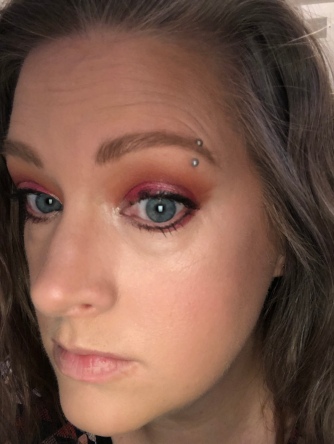 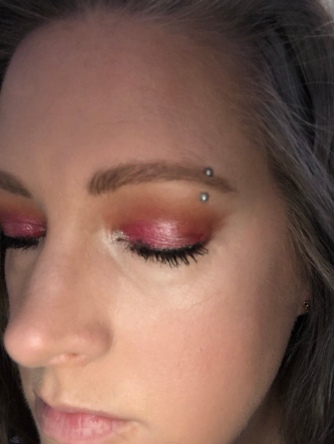 It’s a darker look than I normally wear with this palette but I like it. And, I like that I got to try something that didn’t have another peach transition shade. Prior to this, I truly felt that the only transition shade I could use was clove. I believe I was incorrect. Just took a little finesse.

The next palette is a two for one deal. I ended up using the palette two days in a row. It’s the boudoir eyes palette from too faced. It was one of my first palette purchases and I got it half off. Likely because it seems to have been discontinued. 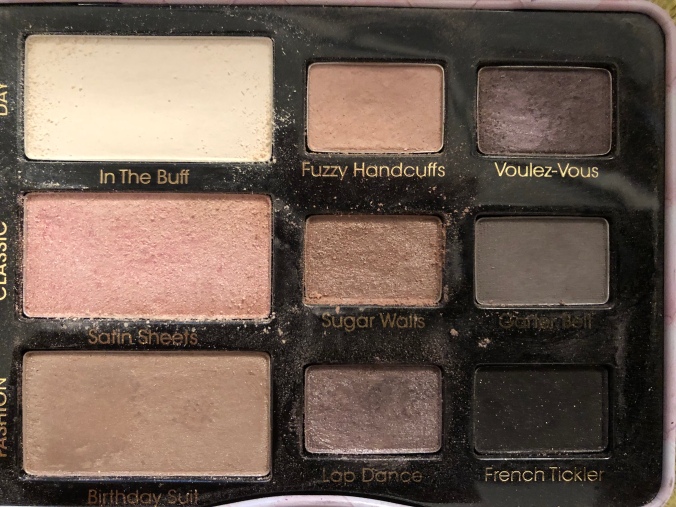 As you can see, I’ve used it pretty well. I like the looks I get from this palette though they are very tame. I like that it is a cool-toned palette, so I don’t have to go pick up the latest cool toned palettes that are on trend as I already have a couple. As for the performance of these shadows, quite a few of them don’t show up all that well on my skin. Most of the colors are very light and the ones that aren’t tend to give quite similar looks once on the eye. Nevertheless, I use this regularly.

The gray matte shade in the middle of the far right row is called garter belt. It’s tough to see in the above photo. I figured I’d get that out there ahead of time since I will be referencing the shade regularly, it’s often used.

In the first quite tame look I used In The Buff to set my eye primer. I then used Fuzzy Handcuffs as a transition shade. If we are honest, that is another color I could use to set my primer as the color payoff is about zero on my skin. But, it does work nicely to blend out the crease color. The crease color is Garter Belt. Then, all over the lid I used Birthday Suit. Garter Belt was used on my under eye area as well. Then, I used my urban decay gold eyeliner to highlight the inner corner, used my milk makeup eyeliner in a nude shade on my waterline, and used a black liner on the outer corner of my undereye and eyelid. 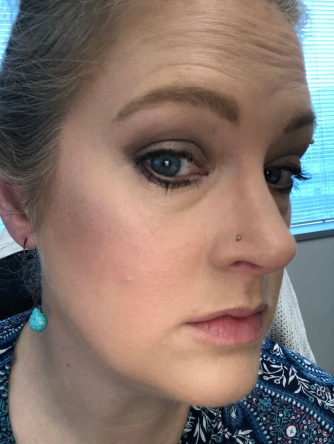 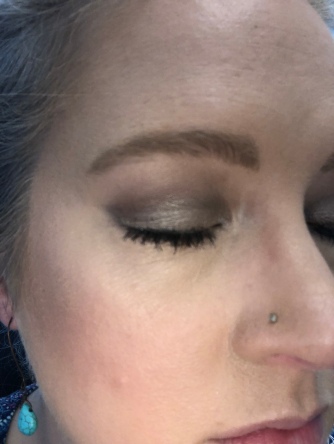 This look is a bit smokey but mostly gentle and I wear it pretty regularly at work when I want something easy and low key. And particularly if I am trying to pair a cooler toned lipstick with my look.

Now for another. In this situation, I paired my boudoir eyes palette with a bright pink shimmer single eyeshadow which I didn’t get a photo of. I don’t think it will matter because you’ll easily be able to see it on my eyes.

I started off the same as the look above with In The Buff, Fuzzy Handcuffs, and Garter Belt in all the same spots. But, I added French Tickler on the outer corner really attempting to shape out a V and a blown out look. Then I added the bright pink shimmer over the lid. I again used Garter Belt in the under eye area and the urban decay gold shimmer on the inner corner. Since I have decided I want to use a liner that is not style sepia that I am trying to pan, I used a dark purple urban decay eyeliner on the outer corners of my lids and undereye. My nude colored Milk liner was used on my waterline. And that was that. 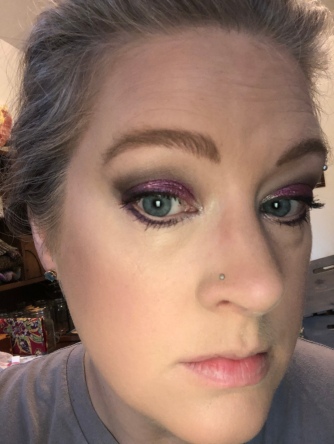 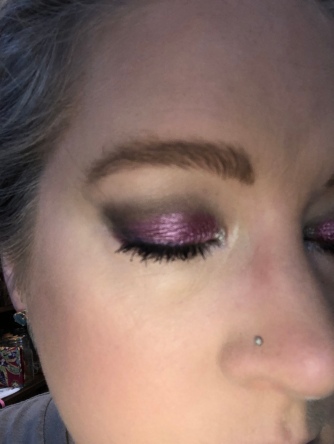 In this case, I did try not to take the bright pink all over the lid but more like 3/4 of it, leaving the black blown out V to add drama all by itself. This is one of those cases where I think a winged liner would look fantastic if I was capable of it, but here we are. Plus, I am wearing this to work and trying to do a winged liner when I’ve only ever successfully accomplished that on one eye once just wasn’t in the cards for the morning. In any case, despite the high drama of this look, I had fun with it, and I paired it with a cool-toned lip gloss of a similar shade to the shimmer on my lid.

This post may get scheduled later, but as I am writing this, it’s Friday morning and it is fun to close out the week with this final look. I managed to post all but one look this week and that was quite fun for me. We’ll see what happens next week!

One thought on “Another Bundle of Eye Looks”