First, a little story. I’ve been mentioning in other blog posts that we are getting a lot of nutty storms out here. On Monday evening, I’d given Miss Butterfly the job of cleaning all my makeup brushes. Doing so would “buy” her a new mascara, which she was in need of. I was worried that on Tuesday morning, before returning to work, I’d go to do my makeup and find that my brushes were still wet.

I needn’t have concerned myself. We got a bunch of storms overnight and the power went out. It’s not actually possible to do my makeup in the dark at 5:30am. which is the time I actually have to work on this hobby during the week. I ended up going to work bare-faced, which hasn’t happened in over a year now. It was no big deal, though I sorta thought it might be. Apparently beginning to wear makeup at the age of 41 is a much bigger deal than just stopping wearing makeup.

In any case, this is all to say that I ended up a day behind on my 3 color weekly challenge due to this day of no power in the house. But, the challenge still got done. Let’s look at Wednesday’s look first. 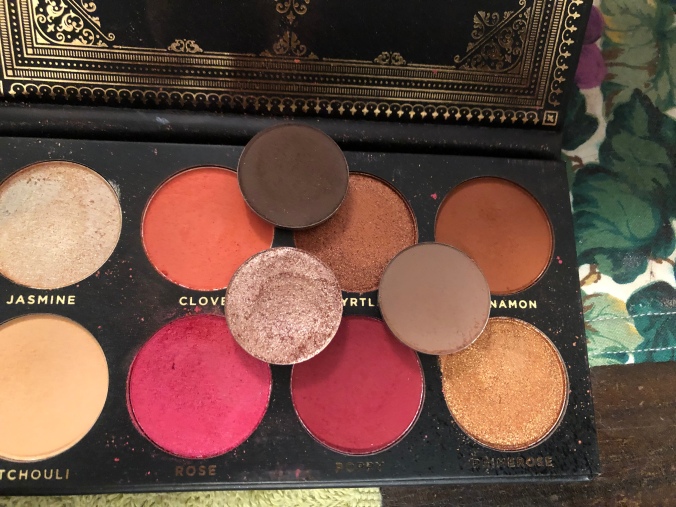 I determined that I did want to use all the colors in my challenge for Wednesday’s look. I also pulled in a darker brown matte single from Sydney Grace, as it’s the next darker shade from Dusty Trails which is in the challenge.

For Wednesday’s look I used Dusty Trails in as a transition shade, the darker brown matte in my crease, and Poppy on the outer corner of my mobile lid. I did fluff it up into the crease a bit, but it wasn’t my goal to really showcase Poppy, I just wanted a darker color on the outer part of my mobile lid. Then, I used Just Peachy all over the mobile lid.

On the lower lashline I used Dusty Trails, bringing it up and connecting it to the color on the eyelid area. Then I decided I wanted a liner of some sort. I ended up choosing a royal blue color. I am not sure it was the perfect look, but I couldn’t figure out another color I wanted to try to use that I had in my collection. My stash of liners, while growing, is not that large at this point, and my color choices are somewhat limited.

I did try one new thing though, which was to use an angled brush to smudge out the liner a bit and then flip it out at the corner. I doubt it shows, as it was quite subtle. I didn’t want to ruin a look when I needed to go to work and was running short on time.

Here’s the look. One of these photos cracks me up, that’s Rose in the background waiting on breakfast. 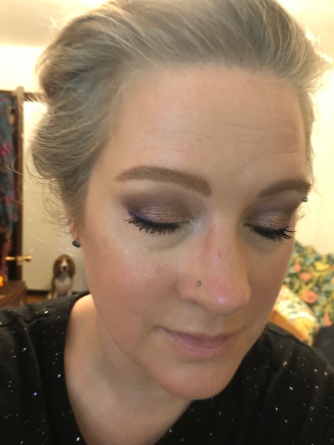 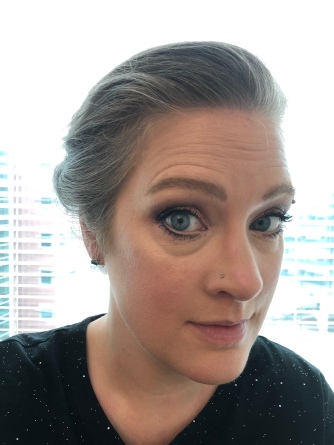 I liked this look! It’s pretty surprisingly subtle considering that the darker matte brown from Sydney Grace is really very pigmented. The Poppy in the outer corner is barely visible but still provides depth.

In other news, with this look, I decided I needed to figure out why I am not using Bare Minerals serum concealer. I can easily see why in my second photo. Nice circles showing under my eyes with the bonus of mascara transfer. I will go back to using that on areas of my face that are NOT my under eyes.

On to look 3. I had a little trouble with this one to be honest. I feel like the three colors I pulled from for this week are surprisingly limiting. Who knew that I’d actually think that bolder, stranger colors were easier to work with!

I swatched out a few options last evening just to see what I could come up with and I ended up pulling in another color from Sydney Grace. This one is a shimmer called Tiara, it’s a taupe shade. It doesn’t advertise as a duochrome but it has a bit of that feel to it. It also has a green tone to it. It’s lovely! 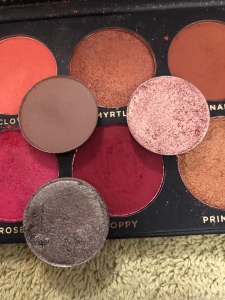 So, as per usual, I used the Dusty Trails as a transition shade. I used Poppy in the crease and on the outer corner. Then, I used Tiara all over the lid. Then, I popped Just Peachy on the center of the lid over Tiara to give it some extra dimension. I used Dusty trails on the undereye and highlighted the inner corner with another Sydney Grace shadow I failed to photograph, it’s called Bailey’s Bliss and it is from the Taylor Bundle as well.

I used a nude liner in my waterline and a dark blue liner on the lower and upper lash line. Here’s a photo of what I came up with: 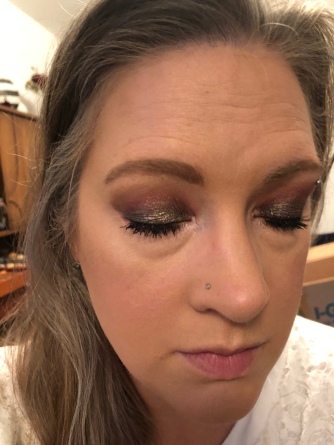 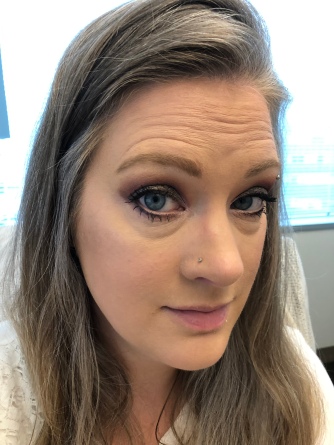 I used the random number generator to choose which shade rolls out of my 3 color challenge for next week, and it’s Poppy. So that leaves me with Dusty Trails and Just Peachy for next week. I’ll show what rolls in next week. I am kind of hoping for something bright since the two shades I am left with are awfully subtle! And here’s a little spoiler, I’ll be adding a bunch of shades to my list.

So, stay tuned for that, and in the meantime, have a great weekend!