So, Mr. Ink and I took a surprise trip. A surprise honeymoon you might even call it. Even we didn’t know we were taking it. You see, due to a family emergency last year, we had to cancel plane tickets to visit Boston. I thought I had a full year to use them up, I wasn’t paying attention. Turns out, when I called them to rebook for our July vacation, I needed to use them up by July 4. So, we quickly came up with a plan to take a little time off this month and see where it was we could go at the drop of a hat for under the amount of ticket we had to spend. The answer was New Orleans.

Now, I went to New Orleans once in my early 20s. Mr. Ink went there once, for his previous honeymoon. We decided we would indeed like to explore the city more. Then, we decided to see if any of our favorite bands were nearby during that time frame. Mr. Ink saw that The Bottle Rockets were playing there. Then, we looked more closely at their schedule and realized that they were playing at an outdoor free food and music festival in Baton Rouge the day before. With other bands we’d enjoy. So, instead of staying in New Orleans for the weekend, we rented a car and headed to Baton Rouge for the Bandito Festival. It was particularly interesting that The Bottle Rockets were the band we saw on our first date 6 years ago at the beginning of July. 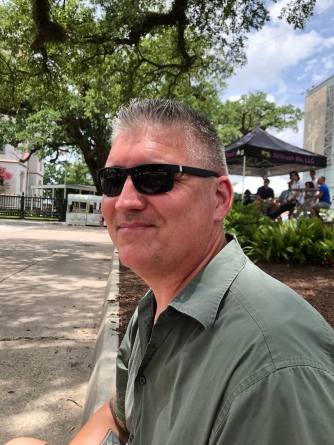 While we are not typically t-shirt purchasers, we did think that this festival needed to be commemorated via t-shirt. We both got one.

The trip was delightful though very hot, which we expected. It was really nice to be together, by ourselves, doing all the things we wanted to be doing in the time frame we were comfortable with. We planned a few things, but mostly did the trip off the cuff. And it worked extremely well for us.

I’ll have more photos from the trip in upcoming blog posts. But, we did return home quite late Tuesday evening, and picked up our dogs on Wednesday. Lizzie went to her regular sitter’s home, and Rose went to her foster family home. They were both very well cared for, and I didn’t worry about them a bit. But I did miss them and I was very happy to have them home again! 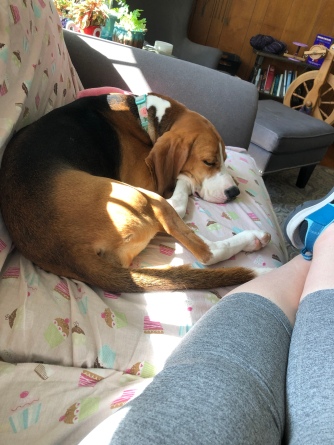 And, one more dog photo, here’s one of Rose playing with one of her foster brothers.

She was so so tired when she got home after a few days of hanging with her foster pack. It was very sweet how sleepy she was. I am wondering how long that’ll last! We shall see.

The night before we left for our vacation, I finished up and soaked my 10-stitch throw. The day we left, I was able to use our bed to block it. So, I finally get to feature it here! 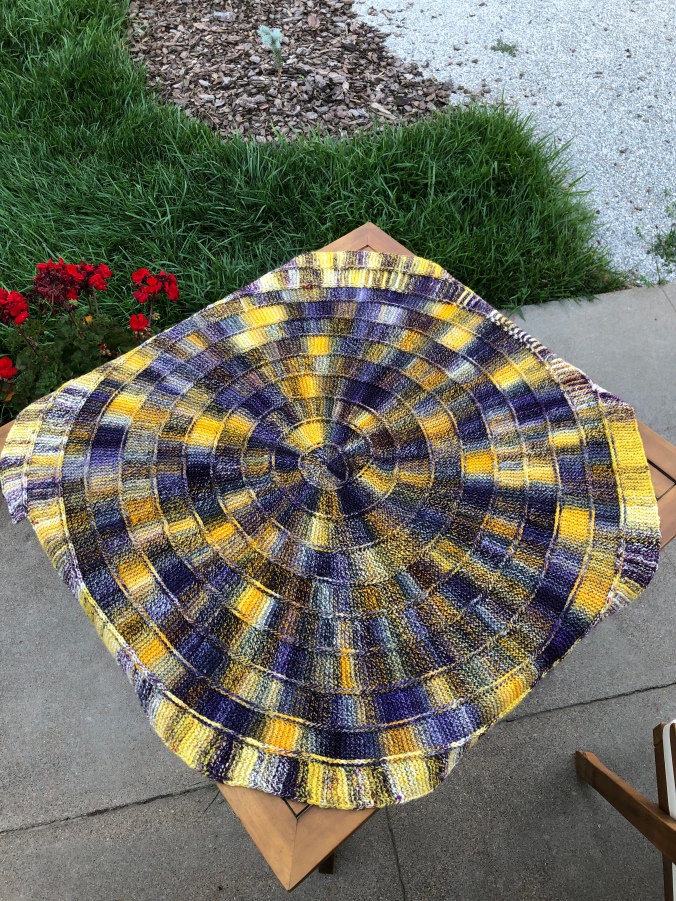 It turned out rather pretty! I am glad that it is done and now lives on the yellow recliner I made it to accent.

And, with this project, I am at 53% of my goal of 40 projects this year. That’s over half in the first half of the year, and with more started as well! I am feeling fairly confident that I’ll be able to meet this goal this year, even if I slack off and spin regularly. (As if that’s really slacking off!)

My goal of under 100 stashed yarns is looking a bit less achievable at the moment, and that is in part due to the slacking off and spinning. I currently have 110 yarns listed but that’s been a relatively static situation lately due to incoming yarns being created. And I have a suspicion a few may be hiding in my stash that aren’t listed on Ravelry, ones which I picked up from Miss Marja’s handspun stash. But, I am still working at it!

The remainder of the week and next week I’ll try to highlight a few photos and activities from our trip interspersed with my regular posting as well. It’s the end of the month this weekend which has a tendency to clog up quite a few days worth of posting, but I am sure that spacing out our trip posts won’t be a huge problem.