It’s been a while since I spoke about our Louisiana trip, so long that I’ve almost forgotten to post about it. But, I do have more photos to show off.

When we discussed what we’d like to do in New Orleans, both Mr. Ink and I had decided that this time, visiting one of the famous cemeteries was important to us. We ended up visiting two. One was on a whim. During one of our adventures out and about for lunch, we noticed the restaurant that we went to was close to St Louis #3. So we just walked on down there and wandered through.

Now, before we’d even planned the trip I’d watched Ask a Mortician’s youtube video on Oven Crypts of New Orleans and had been fascinated with it. So, I kind of knew what I was looking at when we walked through. I’ll try to go through some of the main points, but basically, oven crypts are family crypts where the body is kept in the top chamber for one year and one day. Once that time frame is up, and no sooner, the casket would be removed and the remains put in the bottom chamber with the rest of the family. The top chamber then is used for the next family member who happens to pass away.

Culturally this is the “proper” burial technique of the area but it was often not attainable for the average person. Owning and keeping up these plots was an expensive endeavor. So, eventually, the average person could have a society membership which would buy them space in a society mausoleum, allowing them the “proper” above ground burial when they might not have the means for their own family crypt.

That’s a quick synopsis as to not bore you too much before I show off some St. Louis 3 photos. 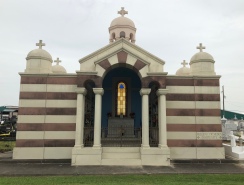 You can see some of the larger society structures in the above photos as well as family crypts.

The next day we booked a walking tour of the garden district and Lafayette Cemetery. Despite it being the hottest and most humid day we experienced there, we really did enjoy the tour. But, because of the heat, I didn’t take very many photos. There’s something about being in that high heat and humidity that just makes you use brain power to do your best to try to stay a tiny bit cooler. The brain gets a bit foggy! But, I really enjoyed Lafayette Cemetery as well.

These are the two oldest crypts in Lafayette. Lafayette is the cemetery that is non-denominational. The St. Louis cemeteries are Catholic. These two crypts may have been here since before the cemetery was formed. As you can see, they have sunk significantly over the years.

Now, not all bodies are dealt with this way in New Orleans. You can have a burial in the ground in New Orleans. This happens with a “coping wall” which is basically a retaining wall in the cemetery. The coffin is buried in the coping wall and then dirt is mounded over top. Since the ground is so wet and soggy in general, that dirt mound is just left and everything sinks, allowing space to bury the next casket right on top. That being said, we saw far fewer coping walls, this is not the norm in the area.

As someone who works with scientists of infectious diseases, I found some of the infectious disease information highly interesting. In the french quarter there were two fires in fairly quick succession, devastating the area. These were in 1788 and 1794. Upon rebuilding after the second fire major changes were made to how the area was built up. Brick and slate was used and it was required to have firewalls between buildings. All buildings must be built right up to the sidewalks, making it easier for firefighters to use pumps for water to fight fires. Much of the distinctive way the french quarter looks now has its roots in that rebuild. The area, being basically a tropical swamp surrounded on all sides by water, had a serious problem with mosquitos and yellow fever. When I say serious, I mean that outbreaks would have bodies piled up outside cemeteries and living folk unable to keep up with the disposal. One of the new rules was that wells or cisterns needed to be kept in courtyards to be used in the event of a fire. Naturally, all that standing water was a breeding ground for mosquitos creating a bigger problem with yellow fever. And since medical knowledge was definitely not advanced enough to realize this problem, the outbreaks continued.

This was one of the reasons for the one year and one day rule, the amount of time a body would be in the upper portion of the oven crypt. It was believed that a year and a day was the amount of time humans would be safe from contracting yellow fever or other infectious diseases from the bodies of the dead. Perhaps more importantly, it meant that the latest body would have spent a New Orleans summer in the crypt, which made short work of the remains. 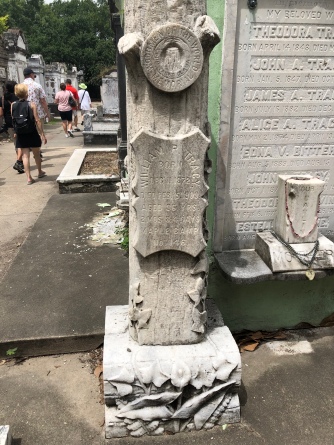 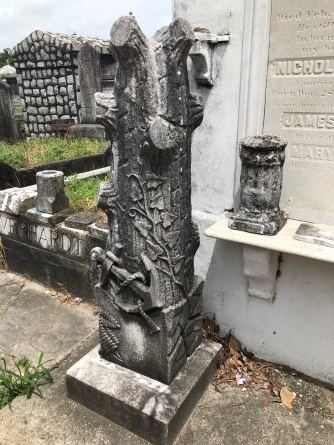 The crypts we saw on both days were old but also still being used currently. While this was the culturally appropriate method for taking care of their dead, it is also an extremely efficient way of coping in an area that is generally closed off and hard to access. Taking bodies out of the area just wasn’t possible and this allowed the city to deal with its dead while not greatly expanding the amount of land needed for a more american traditional burial situation. The tour and the experience was very interesting to me and I am really glad we had the opportunity to learn.