Saturday was Bike Your Park day. And so we did. Mr. Ink and I, along with Best Man, and our very good friend Ann, all gathered at Ann’s family lake house to embark on a I am not sure how many mile bike ride. Maybe 20?A little more? The ride was gravel based, and I took my fat bike because it’s my favorite bike.

We’d been keeping an eye on the radar because we knew it was supposed to rain. We set out a little after 2 pm, as the radar said no rain until 4:45. We figured that gave us plenty of time to get the ride, or at least the majority of it, done. Our route was one which was initially hilly. Serious climbing out of the river valley rollers with gravel terrain. Once we were done climbing out, we turned around and did them again, going back the way we came. It’s amazing how one way you can’t seem to get enough oomph to push you up the next hill even though you try, because you are truly going up even when you feel like you are going down. If you turn around and do those same rollers backwards, you never have to pedal, even on the uphills, because technically you are still going down even on an uphill. It was a very good time.

I took a few photos. It was a dreary day, so they aren’t the best. Before we climbed the rollers, we crossed the interstate and I took a photo of the shrine in the distance. We end up climbing past the shrine, it’s pretty much the first hill of all the upcoming rollers. 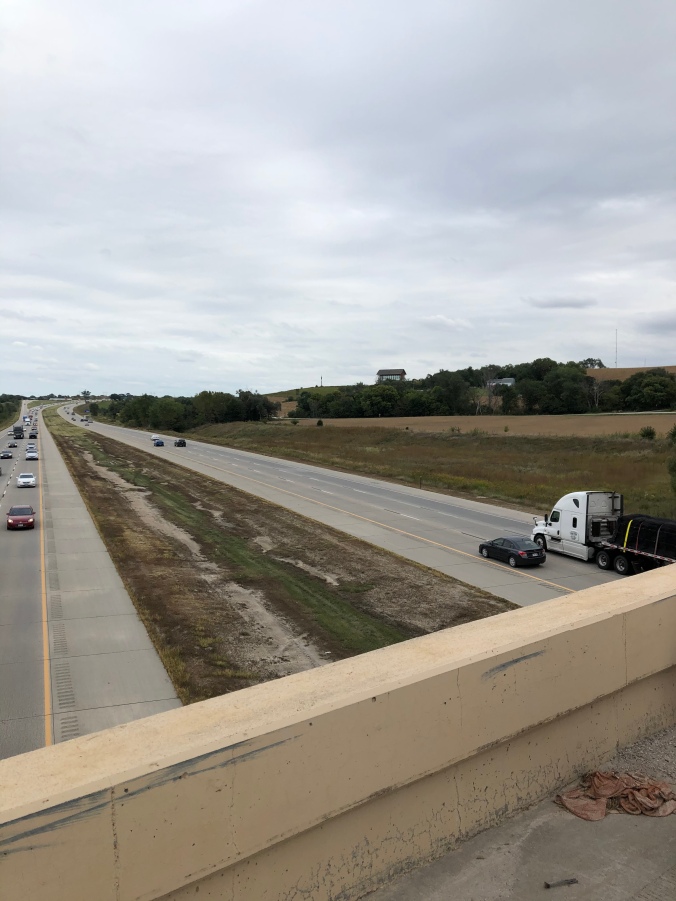 The shrine is the open glass building way in the distance.

After our roller adventure, we headed the opposite direction to a state park and to the river. The river has been flooding on and off all year since we had the extremely bad flooding in March. We’ve never really recovered. The main road is closed past the state park, but we could ride gravel almost to the park and then hop on the main road to get to the park itself. I took a quick photo of the pond in the park, which is also very full because we’ve had so much rain.

Beyond the pond and treeline is the river. You can see it’s quite cloudy already. After that, we rode down to the river, to a spot where Ann and I have had many a deep conversation mid-ride sitting on the banks of the river with a beer. There wasn’t much sitting on Saturday.

In fact, that entire area which once was a beach is now underwater. It probably will be for the remainder of the year. There are roads that no one is even attempting to fix because we know full well that more flooding is coming.

We didn’t sit, but we did enjoy a beer together. It was about 3:30 pm. As we chatted, Mr. Ink kept bugging me to look at the radar. I pulled out my phone, looked at the radar, and said: “We are going to get rained on during our return ride.” With that, we all got on our bikes, and as we did so, it began to downpour.

Look, here’s the thing, riding gravel is hard enough. Riding gravel on a road that is saturated is like riding with a flat tire. The tire slides around under you and it’s a pretty miserable experience. It’s exactly what we experienced the 10ish remaining miles. Actually, we did ok for a while, but as the rain continued, conditions got increasingly miserable. It had started out about 65F, so getting saturated also made things chilly. Nevertheless, I was enjoying myself pretty well!

But, I do believe we were all quite happy to return to our cars! We all had a massive mud stripe up our backs, we were all soaked through, and all of our bikes and associated gear was a muddy gravely mess. I took a car selfie. 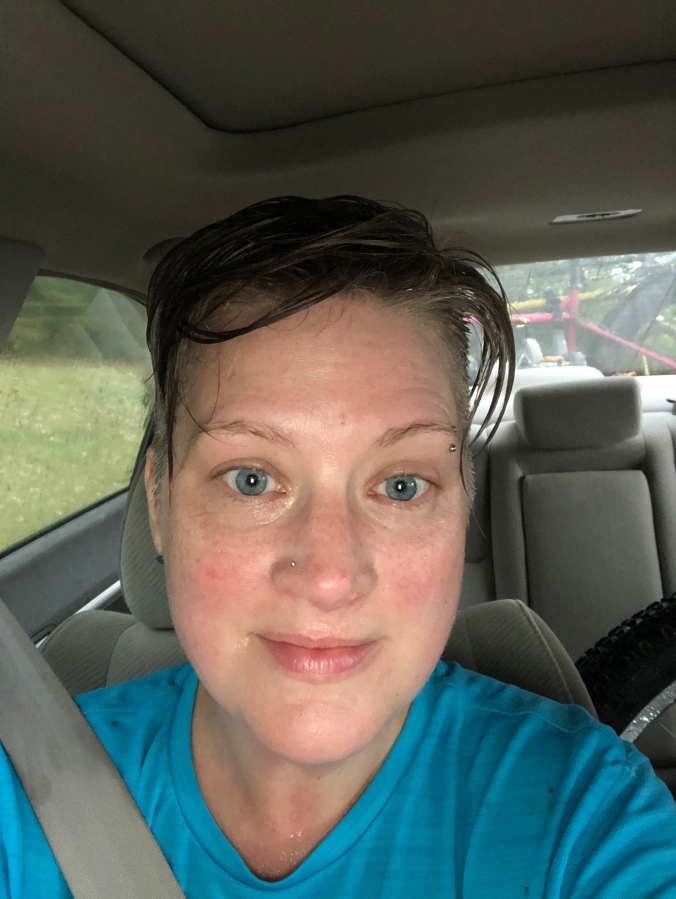 Because you should definitely remember that kind of a drenching ride!

Once home, the work wasn’t over. We then had to take all our gear out, while it was still pouring, and hose it all down as well as ourselves. It was a bit demoralizing to drench ourselves with cold water after having already been good and drenched for a very long period of time! After that, I took care of the dogs and then took a nice hot shower. Mr. Ink got all the gear and bikes inside, dried the chains, and got them lubed so they wouldn’t rust. Then we made an early dinner and settled in for a movie since we wanted to stay warm and cozy.

It was a very good day. Not the ride we were expecting, but sometimes you ride the ride you are given.

One thought on “Bike Your Park”