Over the weekend, I finally decided it was time to have a go. Here’s the palette. You can see that it has been used. Mostly by Miss Butterfly but now that she has a number of her own lovely palettes, she doesn’t pull it out to use anymore either.

I’ve depotted a few other things and it hasn’t gone particularly well. Mostly because, I believe, I am attempting to dig out the shadow pans from above. This time I figured it was time to go after them from a more logical place. I used an x-acto knife to remove the packaging around the cardboard that the pans sit on.

This ended up coming off in 3 pieces. Initially, I cut the lid off. Then, I cut around the outside of the palette and pulled off the top piece. Below that was the cardboard I was trying to get after and under that was another thick cardboard piece. I was able to remove the cardboard under the palette as well.

Then, I pulled out my iron and set it on the lowest setting. I put the cardboard on the iron and held if there for about 2 minutes. This loosened up the glue that the pans were stuck on with and I was very easily able to pry them up gently without bending or otherwise disturbing the pan and cracking the shadow inside. Sadly, my iron then broke. It refused to turn back on, so I pulled out a hair straightener and started again.

I had originally intended to make up 3 smaller palettes, but I realized that the magnetic palettes I had actually lend themselves better to combining a good portion of the shadows. Here you’ll see the large warm-toned palette I created on the left. This is mostly the shadows from the depotted palette along with a few sydney grace singles and a depotted pur palette single I felt matched nicely. Many of the mattes in the JH palette are redundant, so I removed some of the redundancy. Then, I ended up pulling out the pops of color and putting them in a different palette. I added back in some of the redundant mattes and a vanessa’s vanity single shadow that never had a truly appropriate home. It now looks nice with the darker purple from the JH palette.

JH palette originally had 35 shadows and it was “too big.” The analysis paralysis was real when I’d pull out that palette. The large magnetic palette has just 7 fewer shadows, but are arranged in a way my brain can make a little more sense of it all. Mattes on one side and shimmers on the other. This might not be its final arrangement, but it is a heck of a lot more inspiring to me already. Plus, the size of this palette fits nicely on my vanity. I haven’t used it yet because I ran out of the little magnets I need to affix to the back of the pans. But I am eager to use it now, and that’s what counts.

I did take a photo of the vast majority of my single shadows together in the palettes I’ve created for them. 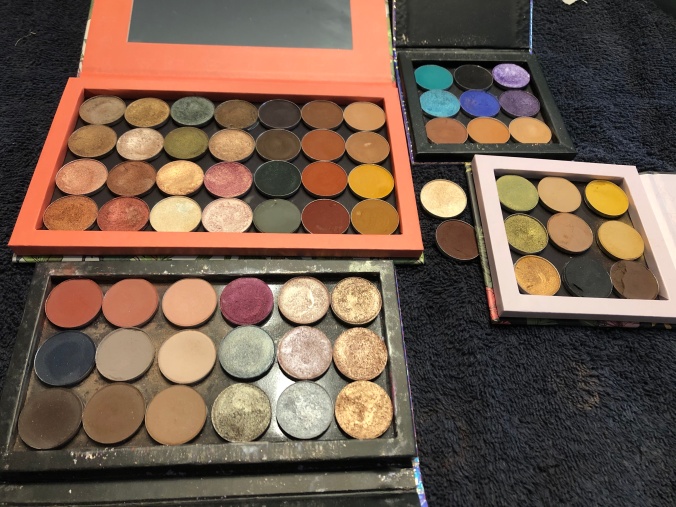 I’ve got two other tiny palettes that I forgot to pull out for this, but it really doesn’t add much to the collection as a whole. The cooler-toned palette is mostly sydney grace shadows from their taylor bundle, deep and light. Then, the small yellow and green palette has sydney grace, vanessa’s vanity, and some depotted pur shadows. I was looking for something similar to melt’s gemini palette and I feel like I can really dupe the vibes with that little palette. It lacks some of the orange-toned shades but that wasn’t what interested me the most anyhow.

In any case, I am ridiculously pleased with the turn out of this palette. For me, depotting has to get to the point where I am considering decluttering the entire palette if I can’t depot it. I have to be ok with losing those shadows. I have to be ready to live without the palette at all in its current form. Then, I am ready to attempt depotting it. That is definitely the case for this palette. I hadn’t pulled it out to use since December 2018. Tomorrow I plan to post about another palette that I am considering depotting. More about that then.