While I didn’t get to roll anything new in on my makeup project pan, I am doing so on this one. Though technically I didn’t finish anything in this one either! 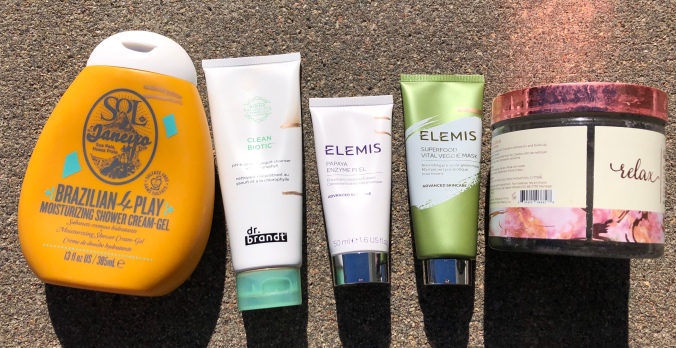 My items last month are above. You can see some of the markings on them, the starting point and the ending point. I had truly intended to have that tub of exfoliator done this month, but didn’t get to it. However, it’s so close to being done that I am adding something in place of it to work on in tandem. If I finish the tub in the next 10 days, you won’t even see it in the next update, as I’ll add it to my empties.

Now, you can see a green line far below the original lines on my body wash. I had thought that I could leave it in my shower and hopefully no one would use it but me. It has become clear that this was NOT the case. In fact, it only got left in the shower daily for ONE WEEK before I noticed that someone in my family was gorging themselves on it. I now remove it daily. I imagine progress will go back to being quite slow now.

The elemis superfood mask has only the smallest amount of progress. I didn’t mark it since I hadn’t used it at the start, first update is a gold line, second a green line. So, not much use there.

But, I found a massive air bubble in my elemis chemical exfoliator so that’s showing a TON of progress.

My dr. Brandt face cleanser is moving right along, I think it’ll take me another 2 months to finish but steady progress is being made.

I did open the tub of body exfoliator this time, so you can see that I am on the very last dregs of it. I’ve actually been using this to exfoliate my hands well before using a good hand lotion lately. It’s starting to warm up a bit so this is less necessary than it was in the dead of winter. I may add it back to the shower.

And adding in the shea moisture in shower body conditioner. I don’t like this product much. I don’t think it does much. I don’t like the gentle coconut smell either. I won’t repurchase this. I’ve got a no packaging product from lush that works so much better for this purpose! So mainly I am hoping to concentrate on it, finish it up this month, and find something else to add in.

That’s it for this project. Partners in cream is the next project and that update is on the 10th of the month. I feel that I’ve made nice progress on that one so I am eager to show that off next weekend!