This part is the one in which I have begun doing some work at home. I am not able to work every day from home, but more than I was. Doing so has been interesting. I had hoped for scads of quiet time where I could work on some longer-term projects I was saving up. It has certainly been busier than I expected. That’s ok though! I suspect we are in this situation for the long haul, and those projects will be there.

The long isolation has Miss Butterfly getting a little creative with her time. She wants to go to the dog park daily, which we are in agreement with, and the dogs are totally down for. I understand, when it’s basically the only time she gets out of the house, it makes sense that she’s up for doing that which she’d previously have avoided. A few other things she is doing-making us dinner. This is a shocker! Since she can no longer do her camp volunteer work, as all activities are canceled, the camp coordinator sent out the recipe for their hobo dinners. Miss Butterfly decided she’ll make us hobo dinners, and she did. Now she wants to make them weekly. To be honest, they are pretty tasty so we are not opposed. And it gives Mr. Ink a night off. 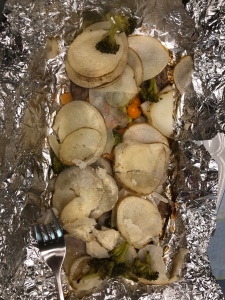 She sliced the potatoes thinly so they would cook fast, added broccoli to the recipe on her own, and also cut up carrots. Under all that is ground beef, though I think we could easily do smoked sausage as well. And onions, they are also involved.

She’s working on schoolwork online. Originally she said there wasn’t much of it, but they’ve added to her workload so she’s gotta stay on top of it now.

And then, when all that is done, she is playing sims4. Now, I got the game for me, and I have played quite a bit. She tried playing, but didn’t love it. Until I showed her build mode. She has been creating these floor plans for years on graph paper. She draws them out carefully and adds furniture, etc. So, I got her started building houses in sims4 and she’s obsessed. I am glad, it’s a fun and sensible past time. And, it gives me the opportunity to say “Get your online schoolwork done and then you can play the game.”

I am still working at my lintilla shawlette when I get an opportunity. I am still appreciating the long rows of garter stitch and the handspun yarn. With working from home a bit, I am able to better turn off my brain and let work go, bleeding into the next day in ways I was unable to do previously.

So, that’s us, that’s here. We are doing what we can to flatten the curve, doing what we can to keep what is allowable and essential up and running, and attempting to appreciate this new way of life in the meantime. We do hope things are similar for you and that you are doing ok, staying healthy, and staying practical.

One thought on “Quarantimes Part 2”