Our 9th foster over the course of a year arrived this weekend, want to see her?

She’s a gorgeous brindle girl only about 30 pounds and a year old. She’s about as opposite as she can be from our last foster in personality. She’s terrified of people. Dogs seem ok. She would prefer we did not touch her or approach her at all most of the time. She’s been a challenge because while we don’t want to scare her, I do have to put her on a leash to go outside for potty time, and she absolutely does NOT want me to do that to her. Once she’s on the leash, she’s fantastic. But the act of going to her and putting her on a leash is terrifying as far as she’s concerned.

So, she’s got a long way to go compared to some of our other fosters. With other nervous dogs, they’ve wanted to be snuggled until they feel better. This gal absolutely doesn’t want that. But, she is warming up! She plays around the house when people are sitting quietly, she entertains herself very well. She approaches us humans when we are still and sniffs us all over. She’s taking treats out of our hands, seems genuinely happy to see us even though she doesn’t want to be touched, and even hopped up on the couch to sit at the other end while I was on the couch. Progress is being made!

She has been treated for heartworms and still has about 3 weeks of kennel rest so we will have time with her. Our last 3 fosters were adopted within 2-3 weeks of getting them in, so it’s nice to have one we know will stay for a bit. She’s never lived in a home before, we suspected this before it was confirmed. She is much more comfortable outside than she is indoors. I thought there would be a lot of learning for having never been in a home before, particularly in regards to potty training. But in reality, she likes to go outside for her business, so that hasn’t been a problem at all. Now it’s just teaching her what is and what is not an appropriate toy. Since she’s so scared, she is easily corrected even in the gentlest of voices.

While the confident fosters are fun, they are often also a handful and I don’t feel I have much to give them other than a warm home until they find their forever home. With the nervous ones, I have even more of a sense of joy from fostering as I get to teach them, show them gentleness, and work with them to gain their confidence. The gains are so easily seen with a nervous foster and as such, I am having a great time with this little gal.

Our sweet little foster dog found her new home! We received an approved application for a woman who works from home permanently, a woman with a fenced-in yard, someone who doesn’t have other dogs, but has grandkids and granddogs that visit.

When she came to meet our sweet foster, it was apparent that she was just as taken with her as we have been for all our dogs, meeting them for the first time.

So, after a few days where our foster dog finished up her treatment and got to go to the dog park:

And got to go on a few walks with us, and meet neighborhood children, we prepared for her to leave our home.

We said our goodbyes and treasured her completely for about 24 hours before it was time for her to go home. And when it was time, we got her all dressed up and headed over to her new home which isn’t at all far from our home!

She walked into her new home and acted like she owned the place. Not even a little hesitation. She even managed to find a bag of dog food in the basement to investigate. She used her nose all over her new home and I am certain she’s still doing that today.

We couldn’t have anticipated a more perfect home for her. And while we miss the pitter patter of a third set of dog feet in the house, we are so pleased that she’s found a forever home!

Since the first post where we originally got our little foster dog, I haven’t given any updates! I think this is because it’s been quite busy with 3 dogs in the home.

For the first two weeks she was in our home she was not feeling particularly well as heartworm treatment is rough on dogs. She mostly slept and wanted to be on a human or left alone.

After two weeks she was feeling much better. That made the forced rest that she was on a little more difficult. But, it also made her more comfortable with our resident dogs. For the first two weeks, we were struggling with her and Rose getting along. To be fair, we still struggle from time to time. But with her feeling healthier, it’s definitely easier. 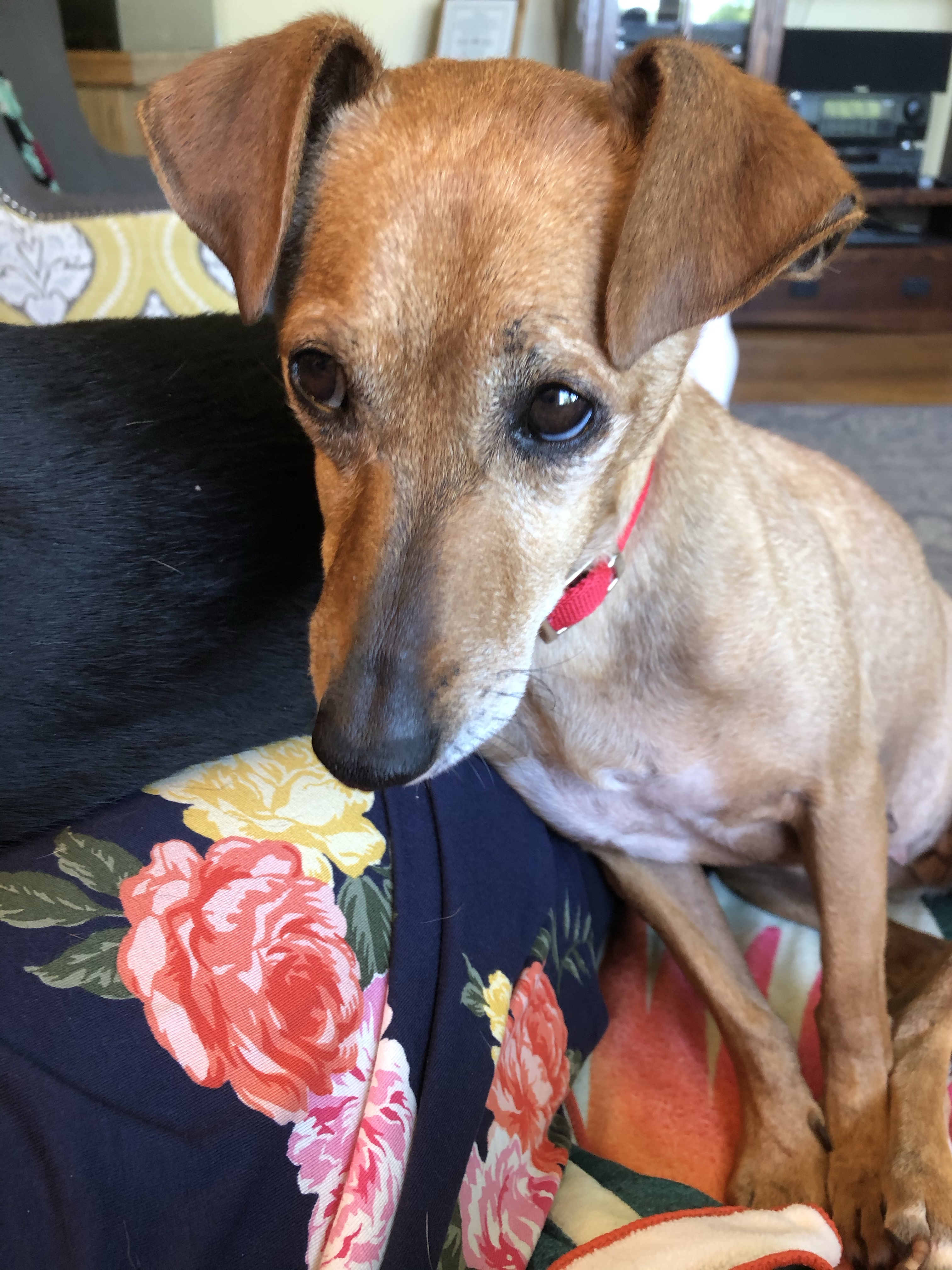 She’s particularly fond of sitting on or near the humans in the home. In this photo, she snuggled up to Fury for the first time. She also knows how to work those eyes and ears!

On Wednesday she’s finally done with her forced rest for heartworm treatment and can go for a walk with our dogs. I think this will be so welcome to her, as well as being a good thing for our dogs all to do together. We do feel that by taking on a dog going through heartworm treatment, we were unable to use all the tricks and techniques we generally do in order to integrate a new dog into our household. 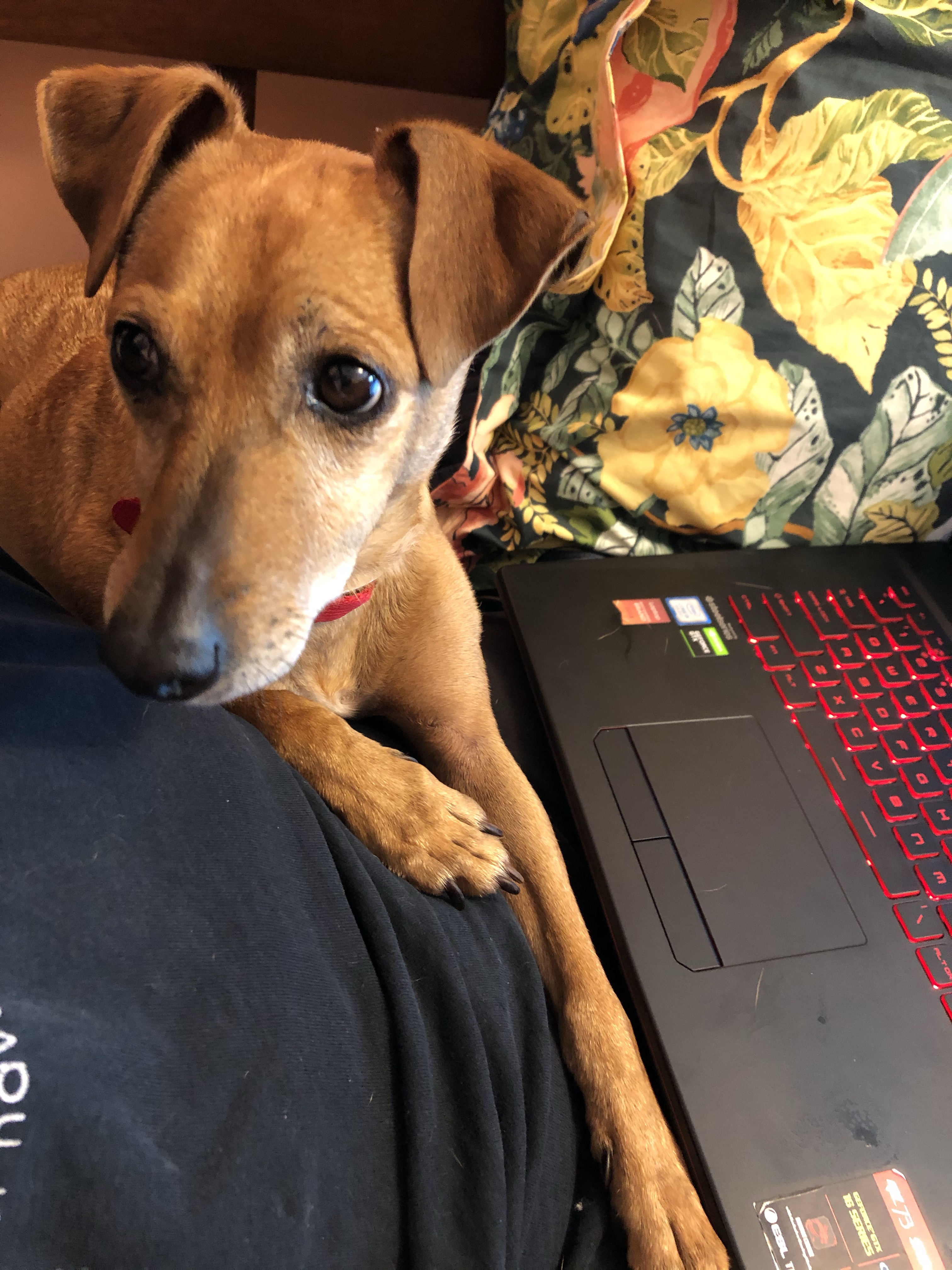 Here she is helping me work from home.

She really is a darling little dog. We are still waiting for a family to adopt her. She will stay with us until that happens. But once it does, well be able to choose a new dog to foster, thus being able to save one more.