I finished my first mitten for my nephew’s christmas gift. I have always loved and admired Ummeyusuf’s Dino Mitt’s pattern, but never had a great excuse to knit them. Until now. I can’t imagine for an instant that a cute, sweet little boy wouldn’t love a pair of dino mitts.

I got the first mitt done this morning. I had everything knit yesterday but didn’t want to do the assembly, so I started on the knitting of the second mitt instead. This morning I did the assembly. 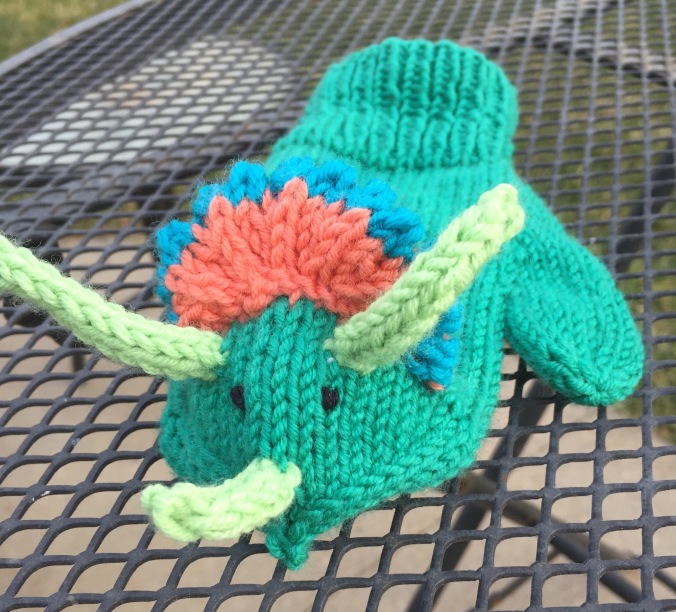 It really looked goofy to me and I wasn’t too pleased, until I put those eyes on him. Once he got eyes, he came to life and I just couldn’t stop smiling. He’s so cute!

The assembly really was the only tricky part, and that’s simply because it’s a small mitten and trying to work on the inside of it is a challenge. But, I think everything is very nicely secured and I am ready to knit the second one.

As I mentioned yesterday I finished the living room project in the morning. Now, one of the really annoying things I do in my house is leave socks all over the place. It’s a habit I just have never been able to break. My socks will come off and they’ll just lay on the floor where I took them off. And then at some point I have to round them all up to take to the laundry bin. One would think at almost 40 I could break the habit, but I have yet to be successful. So, as I was leaving the house yesterday to check on my friend’s cat, I turned around all eager to look at the beauty of a very clean living room again, and realized I’d left a pair of socks on the floor in there. Moment ruined. Ah well.

I did get the rest of my bulbs planted yesterday, as well as some mums. That was my big garden moment. I really should have stayed outdoors and cut back  more plants, but I’ll put that on the list for today. And also on the list for today is the dining room. It’s not a large room so it’s actually a pretty easy project EXCEPT for the fact that I keep putting stuff I am not sure what to do with on the dining room table to sort later. So, I guess I’ll have to actually, you know, DEAL with that stuff.

As for Mr. Ink’s den, we brought in the  dresser for him to put stuff in, and decided to also bring in the desk though that hasn’t happened yet. And then he decided that I should move my bookcase out of there and into the hall. So, major rearrangement is actually happening in that room.

In any case, the point being that vacation continues on. I’ve done a lot less knitting than I’d like, but I’ve also had time to take walks and enjoy the outdoors, despite the cooler weather. It’s been a good vacation thus far, and I am grateful.