Only two more months left on this project, hard to imagine I’ve stuck with it for an entire year!

First up, fragrances. I only managed to finish one this month. This is in part because I’ve been sick for a week and a half. When I am sick, I run the danger of associating a fragrance with being sick. So, I tend to just not use them at all until I feel much better. 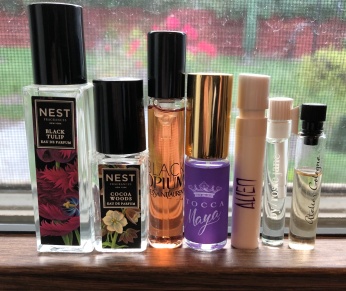 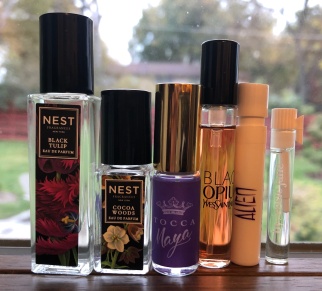 I finished the Atelier sample. This one is the Vanille insensee. I liked it well enough, and thought I liked it quite a lot until I got sick while wearing it. So, that’s a no for me now. I believe that the Alien sample has just a spray or two left, so I am close on that one. And I did use Black Opium from time to time this month as well.

Let’s do palettes next. 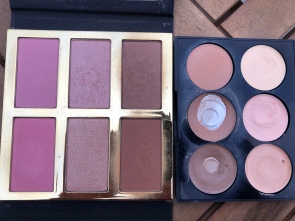 There is the tiniest bit of progress on the darkest contour shade of the sleek palette. I have used the contour and bronzer on the tarte palette very consistently. I’ve used the blush and highlighter far less consistently.

The Mary Kay exfoliator has been used, a bit of progress made. I finished the Mac foundation completely, and you’ll see I’ve substituted in my IT cosmetics illuminating CC cream. I like it paired with the Born This Way foundation, so they’ll both see use this way. I did not make discernable progress on the born this way foundation, I’ve used it perhaps 3 times. The Sin & Co finishing spray did get used, though I think I’ve failed to use it for the past week. I need to get back in the habit. Then we have 3 primers. The No Poreblem has not been used, I’ve concentrated on the Becca and the Porefessional.

I feel like good progress has been made in these photos. Starting with the tarte blush, I have worn away the product around the one side. That’s great progress. I have used half the body butter. I have used the Bare Minerals concealer very consistently, and it’s pretty tough to get product out of at this point. I cannot seem to remove the stopper, so once I really can’t scrape it anymore, it’ll be done. The Thrive Causemetics brightener has been used but there’s no progress that is visible. I finished the Benefit Dandelion Twinkle highlighter completely. The AOA Studios powder is looking cruddy on my face. The weather has changed and I don’t have nearly as oily skin. As such, I am rolling out and not adding another powder. I still don’t see pan in my mac paintpot. The IT cosmetics brow pencil is still going strong, but I think I could use it up by the end of the year. I hit pan in my wet n wild eyeshadow. And finally, lip products. I finished the nudestix. I made progress on the bite lipstick, just a bit. And I made good progress on the MUFE one. But sadly, that one has completely turned, so I have to toss it. I’ve only worn the ofra liquid lip once.

And that’s that, another quick run down of my project pan progress. I am quite pleased with it overall this month.